To the Ends of the Earth!

Sometimes in looking back at one's life, certain decisions that are turning points seem to stand out in vivid technicolor. A life decision which may even seem small in the scheme of things takes a turn that dramatically affects everything else you do for the rest of your life. Such is the case for me. One evening at the corner of the Theatre wing of the University of Wisconsin Student Union, I chose to chat with a young man who stopped to talk. I learned many years later that he was indeed hitting on me. We chatted, and from there a 50 year relationship developed. And that relationship, i.e. marriage was characterized by a dramatic broadening of both of our horizons socially, culturally and indeed internationally. That husband loved to travel and see the world. And he dragged me along, though not reluctantly. From him I learned to travel and to see the world's wonderful places, peoples, and promontories.

By googling my title for this post, I found a song by a recent folk band that I had never heard of. Here is a link to a YouTube video for a song from their recent album, Lonesome Dreamer. The band is Los Angeles based, Lord Huron. The lyrics follow the link and express some of the longings for travel that I am sure my husband has felt. I never was entirely taken up by such longings, but I certainly was happy to "follow" him and enjoy the fruits of his desires and plannings. After listening to the song and perusing the lyrics, please enjoy some of the photos that my husband has taken over the years of our vast travels to 96 different countries spanning over all 7 continents. These photos all represent "The Ends of the Earth," in some fashion, either geographically, topographically, due to the remoteness, or just in spirit.

Ends Of The Earth Lyrics

"Ends Of The Earth" was written by Schneider, Ben.
Oh, there's a river that winds on forever
I'm gonna see where it leads
Oh, there's a mountain that no man has mounted
I'm gonna stand on the peak
Out there's a land that time don't command
Wanna be the first to arrive
No time for ponderin' why I'm-a wanderin'
Not while we're both still alive

Oh, there's an island where all things are silent
I'm gonna whistle a tune
Oh, there's a desert that size can't be measured
I'm gonna count all the dunes
Out there's a a world that calls for me, girl
Headin' out into the unknown
Well if there are strangers, and all kinds of danger
Please don't say I'm going alone

I was a-ready to die for you, baby
Doesn't mean I'm ready to stay
What good is livin' a life you've been given
If all you do is stand in one place
I'm on a river that winds on forever
Follow 'til I get where I'm goin'
Maybe I'm headin' to die but I'm still gonna try
I guess I'm goin' alone

To The Ends of the Earth -- The Photos 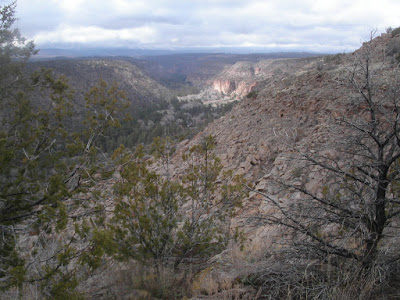 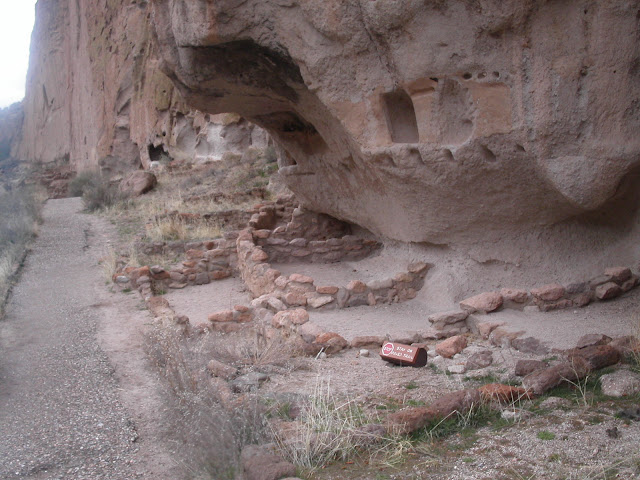 The above two photos are taken in Bandelier National Monument in New Mexico, USA. This area in our own country seems to be at the End of the Earth both in remoteness of place and remoteness of time. It honors the tribal area and ruins of the Ancestral Puebloans, dating from 1150 to 1600AD. This Monument is off the beaten path, just south of Los Alamos, and deserves more visits. Probably few Americans know of this place and its history. Chaco Canyon, also in New Mexico, and Mesa Verde, in Colorado, are better known.

This place is one of the few places on earth that can be truly called the End of the Earth. It is a well known Cape. By definition, a cape is a piece of land along the sea where the coastline makes a significant change in direction.Can you guess which Cape this is? A clue: in sailing, it is one of the three Great Capes, landmarks in circumnavigating the Southern Ocean.
.

For views of another of the Great Capes, see my blog: Mystery Photo 26: Cape of Good Hope at the southern tip of Africa. The third of the three Great Capes is Cape Leeuwin,  Australia. We have not been there.


Let's go north now to some ends of the earth there. In spite of its appearance, this is not in the US; it is not Yellowstone even though it looks very similar. This is a huge geothermal area in Iceland. This is what Iceland is famous for -- one of the several hot mineral baths provided by these warm geothermal waters.

And near here (and seen in photo above)is a true end of the earth: Along this low ridge runs a crack in the rock. Along that crack are many small caves. These caves contain hot mineral water pools and even steam areas. And though you can not see this, at the very bottom of this crack, some 10 to 18 miles deep is the molten mantle of our lovely planet. Stretching from north to south across the western end of Iceland runs the junction between the Eurasian and the North American tectonic plates. They are slowly diverging. While we visited this area, we saw a collapsed footbridge near a National Park visitor center. It had fallen because its supports had moved about a foot apart. The bridge couldn't take the new stresses and collapsed. Also here a foot or so of sidewalk fell away. In some areas here the rift valley is almost 1/2 mile wide. It is in an area like this that the first parliament-like meetings of the local Icelanders took place in 908. 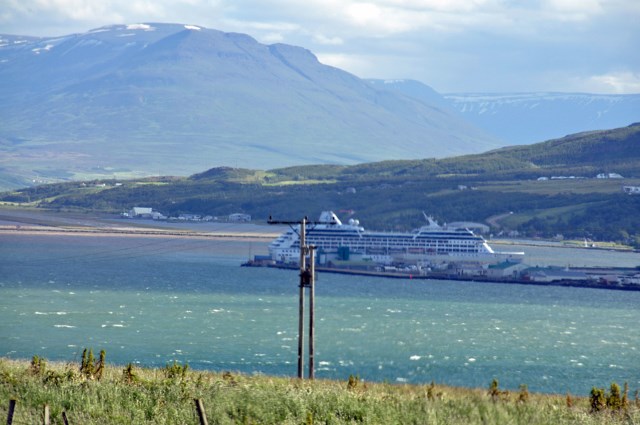 And yes, Iceland is truly green. 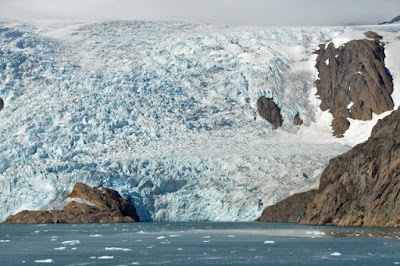 Greenland (above) on the other hand is not green. It is basically white with ice and dark gray with rock.   Talk about misnomers.
And now half around the world: 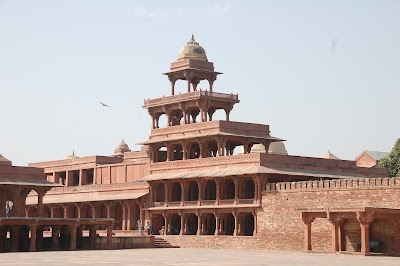 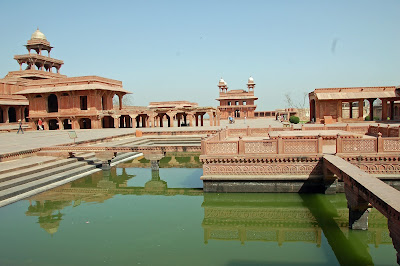 Fetahpur Sikri is located in the Golden Triangle of India formed by lines drawn from Delhi, to Agra, and then to Jaipur. Though it is close to Agra, the Taj Mahal dominates that area and few people bother to journey out to this ancient and well preserved Mughal capitol city. The famous Mughal Emperor, Akbar, built and used this capitol city from 1571 to 1585. He only occupied and centered his Imperial court in a completed fashion for less than a year. Now it is a well preserved ghost town, visited by very few. It is quite impressive, also isolated due to cultural factors and in time.

Here is another kind of end of the earth: Let's say you were a tiny being that could exist at the heart of our planet. And you decided to travel and follow the currents of the hot liquid that is the interior of our planet. You might find a current that seems to be rising. You would travel in this current for about 3,968 miles to the surface. For the sake of this story, let's say you follow a stream of molten rock that eventually begins to seep upwards through the crust of the earth in through various cracks and your travel thus takes you upwards to the top of the Nasca tectonic plate in the Galapagos Islands. You erupt from a volcano on the Island Isabella which has 6 volcanoes, all six of them active. So, little molten rock being, you would see the "end of the earth" as you erupt past the edge of your caldera. And if you quickly looked back down you would see our little boat, Eclipse. We passengers, visitors to the Galapagos, are having a volcano party on board.


I have a very high end of the earth for you. Lesotho is a country in the mountains of southern Africa. It is completely surrounded by South Africa and is the homeland of the Basuto people. To get there from South Africa, it is customary to take a tour from the much lower lands in South Africa up through Sani Pass, at an altitude of 9,436 feet.  Lesotho is primitive and very sparsely populated, so first the rough and rising road to Sani Pass makes you think you are going to the Ends of the Earth and then when you get to Lesotho, you realize you have reached your destination -- at the ends of the earth. Here are a few photos.

Other ends of the earth: