Moles, voles, shrews, and mice?  Which is it?

Moles are fairly solitary, usually not seen because they stay beneath the ground. They eat earthworms, grubs and other underground insect forms. They are the larger of these four animals, have dark black very thick short velvety fur. Their front feet are broad and stick out from the body because they use them to dig. Their eyes are so tiny as to not be visible. The species I have seen in our yard is the star nosed mole. It's nose is quite something. Moles move slowly and are almost blind but are very sensitive to sound and vibration. They are regarded as beneficial to your yard because they aerate the soil and eat destructive grubs. Some people have hired professionals to come and trap the moles thinking they have created all the shallow tunnels in their turf, only to lose large sections of their turf to the grubs that had drawn the moles in the first place. 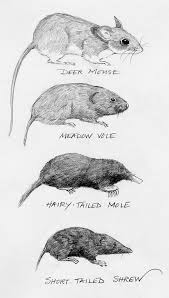 Field mice and deer mice are characteristic mice with long pointy ears, a small pointed snout, and long hairless tail. They tend to be light brown or gray. They eat seeds and plant materials. And they like to come into warm houses for the winter. They can be destructive of various things they encounter in order to make their nests. They are easily trapped with peanut butter, cheese, or bread as bait.

I had no idea how common shrews are. The most common is the short tailed shrew here in Wisconsin. They are the smallest of this similar group of animals, only about 3 inches long including its 1 inch hairless tail. They have a very long pointed snout. They are also carnivorous, eating insects, bird eggs, baby birds, and other baby rodents if they come upon them. They even eat voles which we will discuss next. They have a vicious bite with a toxin in the saliva which will paralyze and kill some of their prey. They even prey on voles and each other. I have never seen one of these little guys. When your cat leaves you a "gift" of a mouse on your doorstep, it is often a shrew. The reason the cat left it is because it has glands which produce such a pungent odor, that most cats will not eat it. However, owls and snakes with their poor sense of smell will prey on these tiny animals.

And of course my animal was a vole. It is between a shrew and a mole in size, with a stubby body, small ears, tiny eyes, blunted snout, and a hairless tail just a little longer than a shrew's. Voles are completely vegetarian. They also multiply very quickly and prodigiously. These are the animals that can do damage in your garden. They eat small tree bark at the ground level and are usually the animal that is guilty of girdling and killing a tree, rather than it being rabbits. They also eat the stems of several garden favorites like hosta, and hydrangea. I now recognize that it was a vole I saw eating off the stems of my clematis. It forced me to put an apron of hardware cloth around that bush. I had blamed the rabbits until I saw this creature in action. My vole on my back porch was doing a destructive number on my osteospermia. I knew there was an unknown reason why I always plant these in my pots and not in the ground. They have left them alone in the pots. Also when the supposed mole runs in your yard are particularly noticeable in the spring, it is more due to the voles using them and digging to the side looking for roots and other vegetation than to the moles themselves. Voles don't like to show themselves so if you keep the mulch and leaves away from trees and other stems the voles will be less likely to eat them because they have to show themselves. If you have a problem with the number of voles, you can easily catch them by putting traps baited with peanut butter along their runs, and covering the traps with a small cardboard box, or pot. They will be more likely to investigate the peanut butter in the dark under the box or pot. If you catch one, then put a slice of apple under the box. If you see teeth marks in it the next day, use the trap again. Fortunately, voles usually do not come into the house on their own as mice do. Unless, of course, brought in accidentally as I did and then they seem rather ingenious about finding the plant materials.

Always curious, I learned a lot. Hope you did too.